Once again it has been a busy year for the Election Law Blog and 2018 promises some big news as well in the area of voting rights, campaign finance, filibuster reform/political polarization and other topics.

I am very much looking forward to March 2018, when my new book, The Justice of Contradictions: Antonin Scalia and the Politics of Disruption will be released by Yale University Press. (You can preorder at Amazon, though the Kindle and audiobook links are not yet up).  I’ll be doing some talks connected with the book, and I’ll be announcing those dates and locations in January. 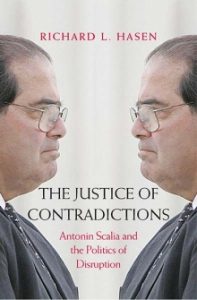 Below the fold you’ll find a list of books, articles, and opeds that I’ve published (or that were released in draft) in 2017.  Thanks for reading!

END_OF_DOCUMENT_TOKEN_TO_BE_REPLACED

After a contentious special election, Senator-elect Doug Jones is set to be sworn into office Wednesday in Washington.

Jones will be sworn in on a family Bible, a spokesman for his transition told AL.com on Sunday. He will be joined by family and friends for the ceremonial portion of the act for pictures with Vice President Mike Pence, who administers the oath. Senate rules bar photography during the official swearing in, where Jones will be signing a copy of the oath and reciting it….

Moore did not concede to Jones and filed a lawsuit alleging voter fraud in the race, but the suit was thrown out of Montgomery County Circuit Court after a judge ruled the court did not have jurisdiction over the matter.

Alabama Secretary of State John Merrill said Saturday that the deadline had passed for Moore to seek a recount using his own funds. The state threshold for an automatic recount is a .5 percent margin.

Under Alabama law, however, Moore, as a candidate for federal office, was never entitled to request a recount.

Commonwealth Court judge recommended Friday that the Pennsylvania Supreme Court uphold the state’s map of congressional districts in a high-profile gerrymandering lawsuit that challenges the map as unconstitutionally drawn to benefit Republicans.

Democrats hold a 5-2 majority on the state’s high court, which has fast-tracked the suit. On Friday, the justices scheduled oral arguments for  Jan. 17 in Harrisburg.

“A lot can and has been said about the 2011 Plan, much of which is unflattering and yet justified,” wrote Commonwealth Court Judge P. Kevin Brobson, who had been tasked by the high court with holding a trial and submitting “findings of fact” and “conclusions of law” before the end of the year.

The plaintiffs had shown that partisan considerations were taken into account in creating the map, he wrote, and that more politically neutral maps could have been drawn that would not have been as favorable to the GOP.

But some degree of partisanship is considered acceptable in redistricting, he said, and the plaintiffs had not created a “judicially manageable standard” for the court to decide whether the map crossed the line.

“Petitioners, however, have failed to meet their burden of proving that the 2011 Plan, as a piece of legislation, clearly, plainly, and palpably violates the Pennsylvania Constitution,” he wrote. “For the judiciary, this should be the end of the inquiry.”

Evan Osnos for the New Yorker.

Much ado about nothing in Alabama “fraud” charges

That idea was bolstered by a report from Yahoo News this week that investigators working with special counsel Robert S. Mueller III were talking to staffers for the Republican National Committee who worked with the Trump campaign on voter targeting efforts. “They are seeking to determine if the joint effort was related to the activities of Russian trolls and bots aimed at influencing the American electorate,” sources told Yahoo’s Michael Isikoff.

This plays into a popular sense of how the 2016 campaign unfolded. The Russians launched hundreds of Facebook ads, reaching millions of people in critical swing states. They unleashed thousands of fake Twitter accounts, which got retweeted hundreds of thousands of times. The targeting of users on Facebook in particular was described in various news reports as appearing to be “highly sophisticated” — naturally raising the question of whether the Russians had been aided in their efforts.

All of that, though, requires setting aside what we actually know about the Russian activity on Facebook and Twitter: It was often modest, heavily dissociated from the campaign itself and minute in the context of election social media efforts.

States rushing to guard their 2018 elections against hackers may be on a waiting list for up to nine months for the Department of Homeland Security’s most exhaustive security screening, according to government officials familiar with the situation.

That means some states might not get the service until weeks before the November midterms and may remain unaware of flaws that could allow homegrown cyber vandals or foreign intelligence agencies to target voter registration databases and election offices’ computer networks, the officials said. Russian hackers targeted election systems in at least 21 states in 2016, according to DHS.

Merrill said Moore has a few options left, such as offering to pay for a recount within 48 hours.