David Cottrell, Michael Herron, and Sean Westwood have written this article for Electoral Studies. Here is the abstract:

As Republican candidate for president and later 45th President of the United States, Donald Trump has claimed repeatedly and vociferously that the 2016 General Election was tainted by massive voter fraud. Here we use aggregate election statistics to study Trump’s claims and focus on non-citizen populations across the country, state-specific allegations directed at California, New Hampshire, and Virginia, and the timing of election results. Consistent with existing literature, we do not uncover any evidence supportive of Trump’s assertions about systematic voter fraud in 2016. Our results imply neither that there was no fraud at all in the 2016 General Election nor that this election’s administration was error-free. They do strongly suggest, however, that the expansive voter fraud concerns espoused by Donald Trump and those allied with him are not grounded in any observable features of the 2016 election.

Peter St. Onge for News and Observer ed board:

We looked at more than a dozen op-eds, interviews and projects that Persily has participated in during the last decade. He’s commented on court decisions involving North Carolina cases – as Strach notes in his filing – but Persily’s analysis of those cases wasn’t particularly controversial or partisan. Still, Republicans should be worried about the maps that Persily might draw – not because he’s biased against the GOP, but because he’s biased against voters being disenfranchised.

A three judge state court, on remand from the NC Supreme Court, unanimously held that the changes to the Election board rules came up as a nonjusticiable political question, meaning the courts were without the power to reach the merits. In the alternative, the lower court held that the changes to the composition of the elections board did not violate the separation of powers guaranteed by the state constitution.

The issue will now be appealed to the state Supreme Court, where Democratic judges outnumber Republican judges. These changes were put in place by the NC General Assembly just as a Democrat was elected governor, so as to weaken the governor’s appointment powers over the elections board.

And although the charges have largely been seen as a blow to the White House, Monday’s actions by special prosecutor Robert Mueller also sent shivers down the spines of Washington’s lobbyists, both Democrats and Repulicans.

Manafort and Gates, who allegedly failed to disclose the full extent of their work on behalf of the pro-Russian Ukrainian Party of Regions, are now being charged under the Foreign Agents Registration Act, a 1930s era law aimed at curbing the influence of pro-German propaganda ahead of World War II.

In the last half century, the Justice Department has brought only a handful of enforcement actions against lobbyists for violations of FARA. That lack of prosecution resulted in a proliferation of under-the-radar lobbying. Now Washington’s cottage industry of consultants and public affairs specialists can only wonder if that era has come to an end.

The new ad from Freedom Partners Chamber of Commerce, a hub of the Koch donor network, comes at Sen. Tammy Baldwin (D-Wis.) from a surprising angle — attacking her as a foe of the little guy. In the spot, one of three now running in Wisconsin, a narrator talks over hard-rocking guitar and images of blue-collar workers.

The guilty plea of a 30-year-old campaign aide — so green that he listed Model United Nations in his qualifications — shifted the narrative on Monday of the Trump campaign’s interactions with Russia: Court documents revealed that Russian officials alerted the campaign, through an intermediary in April 2016, that they possessed thousands of Democratic emails and other “dirt” on Hillary Clinton.

That was two months before the Russian hacking of the Democratic National Committee was publicly revealed and the stolen emails began to appear online. The new court filings provided the first clear evidence that Trump campaign aides had early knowledge that Russia had stolen confidential documents on Mrs. Clinton and the committee, a tempting trove in a close presidential contest.

By the time of a crucial meeting in June of last year, when Donald Trump Jr. and other senior Trump campaign officials met with a Russian lawyer offering damaging information on Mrs. Clinton, some may have known for weeks that Russia had material likely obtained by illegal hacking, the new documents suggested. The disclosures added to the evidence pointing to attempts at collaboration between the Trump campaign and the Russian government, but they appeared to fall short of proof that they conspired in the hacking or other illegal acts.

….because, among other things, he attended a conference in 2006 and “Anita Earls, the plaintiffs’ lawyer, worked for the center [hosting the conference] at the time.”

Facebook will inform lawmakers this week that roughly 126 million Americans may have been exposed to content generated on its platform by the Russian government-linked troll farm known as the Internet Research Agency between June 2015 and August 2017, CNN has learned.

That estimate, which is equivalent to more than half of the total U.S. voting population, offers a new understanding of the scope of Russia’s use of social media to meddle in the 2016 U.S. presidential election and in American society generally.

In written testimony to the Senate Judiciary Subcommittee on Crime and Terrorism, a copy of which was obtained by CNN, Facebook General Counsel Colin Stretch says that 29 million people were served content directly from the Internet Research Agency, and that after sharing among users is accounted for, a total of “approximately 126 million people” may have seen it.

A professor with close ties to the Russian government told an adviser to Donald J. Trump’s presidential campaign in April 2016 that Moscow had “dirt” on Hillary Clinton in the form of “thousands of emails,” according to court documents unsealed Monday.

The adviser, George Papadopoulos, has pleaded guilty to lying to the F.B.I. about that conversation. The plea represents the most explicit evidence connecting the Trump campaign to the Russian government’s meddling in last year’s election.

“They have dirt on her,” the professor told him, according to the documents. “They have thousands of emails.”

From the unsealed statement: 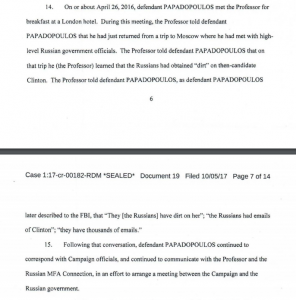 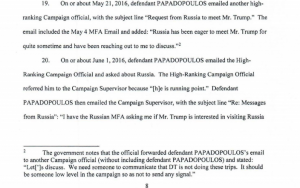 Notably, the arrest was in July and the indictment was revealed today, and today’s statement includes the following tantalizing note which could well indicate that Papadopolous has been cooperating and wearing a wire: 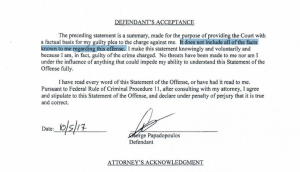 The Papadopolous plea is quite different.

It shows a Trump foreign policy advisor in active communication with what appear to be Russian government officials or spies trying to get dirt on Hillary Clinton, arrange meetings with Russian government officials (even Vladimir Putin, rather ludicrously) and solicit Russian support. That an active foreign policy advisor was taking these actions while in active communication with the campaign about those actions is quite damning. An unnamed campaign official sent back word that a meeting with Trump himself was not happening.

Papadopolous was arrested in July and has apparently been cooperating since. I see no purely legal reason why the news of his arrest in July and guilty plea in early October had to be revealed today, other than keeping the news from Manafort. One other potential reason is that one of the ‘campaign officials’ referenced in the Papadopolous plea appears to be Manafort. It sends two clear messages. First, we’re not at all done with collusion and we’re making progress. Second, we arrested Papadopolous in July and he pled out in October and no one knew. So don’t think you have any idea what we have.

A government watchdog group is suing Indiana Secretary of State Connie Lawson, accusing her office of allowing voters to be illegally purged from the state’s voting roles.

Common Cause Indiana is asking a federal judge to put a stop what it calls “discriminatory and illegal” practices the Republican secretary of state’s office adopted in the wake of new state law that went into effect in July. Lawson’s general counsel has dismissed the allegations as “baseless.”

At issue is how the election division in Lawson’s office allows local officials to remove voters from their rolls if it is believed that they have moved to another state.

Segment here (based on this paper). (Begins around 8 minute mark).

More than 160 political committees and similar groups together owe the government more than $1.3 million worth of unpaid fines, according to a Center for Public Integrity analysis of Federal Election Commission and U.S. Treasury records since 2000.

Some of those unpaid fines amount to as little as $10 while others soar into five figures. Many cases concern all-but-forgotten also-ran political candidates, but others involve political luminaries — the Rev. Al Sharpton, MSNBC host Joe Scarborough and Green Party presidential nominee Jill Stein, among them. Super PACs and politically active nonprofits have joined the nonpayment parade of late. And there’s little evidence any of that cash will soon begin to roll in.

They are in this Bob Barnes story on Justices at the Harvard bicentennial. You can find them directly here and here.

It is based upon my work for the Green Bag on Celebrity Justice, as well as the excellent work of Victoria Kwan and Jay Pinho for Scotusmap.com.