And when the subject is illegal voting, Kobach normally becomes like a “Game of Thrones” fan at a cocktail party. You need an actual wizard to get out of that conversation.

But evidently that is not always the case. It has been a little more than four months since I first reported a potential voter fraud case involving Douglas County Sheriff Ken McGovern and his elderly mother. I’ve asked Kobach’s representatives approximately a half-dozen times for an update on the case. Most times, I haven’t even received a response from his office. I did on June 14. Spokeswoman Samantha Poetter sent me an email saying she expected to have an update for me later that day. That was the last I’ve heard from her, despite checking in several more times.

Why is Kobach silent on the matter? I, of course, don’t know. I can only speculate. Fortunately, one of the perks of being an editor is you are allowed to do that.

I suspect it is because the case puts Kobach — who is running for the GOP nomination for governor and is President Trump’s co-chair on the Presidential Advisory Commission on Election Integrity — in a tough position. As a reminder, here’s the key allegation made against octogenarian Lois McGovern: She voted in the 2016 Douglas County primary while being registered at a Lawrence home that she had sold more than a year earlier. The evidence suggests she actually was living in a Johnson County nursing home at the time of the election. Her son, Sheriff McGovern, picked up the ballot for her, knowing that she was registered to vote at a home where she no longer lived.

Important Michael Wines in the NYT, rounding up the state of play:

ata of the nation’s 200 million voters set off an avalanche of opposition by state leaders in both parties on Friday, as officials from California to Mississippi called the move an overreach and more than 20 states declared they would not comply.

It was an inauspicious start for the panel, which was created after President Trump claimed last winter that millions of illegal votes had robbed him of a popular-vote victory over Hillary Clinton.

The vice chairman and day-to-day leader of the Presidential Advisory Commission on Voter Integrity, Kris Kobach, had asked election officials in a letter to turn over the data “if publicly available,” apparently to aid a nationwide search for evidence of election irregularities. Besides election information like voters’ names and party affiliations, the commission sought personal information including birth dates, felony conviction records, voting histories for the past decade and the last four digits of all voters’ Social Security numbers.

Mr. Kobach, the secretary of state in Kansas, has said he wants to match voter information with other data, like federal records of foreign residents and undocumented immigrants, to spotlight people who cast illegal ballots. He asserts that such fraud is widespread in Kansas and elsewhere, although he has found scant evidence of it so far.

But a growing number of state election officials have indicated — sometimes politely, sometimes brusquely — that they will not or cannot comply. Among them, ironically, were Mr. Kobach himself and a second member of the commission, Secretary of State Connie Lawson of Indiana, both of whom disclosed on Friday that privacy laws prevented them from furnishing some personal voter data.

Nice job by Ari. You can listen here.

Kobach falsely claims he is just asking for publicly available information. But it includes SSNs and other information.

He says the Commission will study security of state voter rolls. This is new.

Kobach says he “does not know” if millions of people voted illegally, as Trump falsely claimed.

“It all depends on what you describe as evidence,” Kobach says.

“They can go jump in the Gulf of Mexico and Mississippi is a great state to launch from,”….“Mississippi residents should celebrate Independence Day and our state’s right to protect the privacy of our citizens by conducting our own electoral processes.”

I noted the federalism issues yesterday.

Truly it is the incompetence that will save us.

Multiple states plan to buck Kansas Secretary of State Kris Kobach’s request for personal information on voters on behalf of a presidential commission.

Kobach said Friday that Kansas also won’t be sharing Social Security information with the commission, for which he serves as vice chairman, at this time….

Kobach said Friday that the commission has no legal authority to compel states to hand over the information but that the Justice Department does possess such power. He said he could not say whether the department would become involved in the effort to obtain information from states.

I have written this piece for Slate. It begins:

Donald Trump’s attempt at voter suppression through his “election integrity” commission is a voting rights nightmare that is being enacted so clumsily it just might backfire…..

Kobach’s likely going to use this information to try to “match” voters and show there is bloat on the voter rolls, such as dead voters and people who have moved but have not been removed from the rolls. He’ll also likely find a small number of noncitizens who are registered to vote. Doing this kind of matching well is tough business: It is easy to claim that two people with the same name are the same person, or that someone is a felon because he has the same name as a felon. But Kobach will not be relying on election administration professionals to do that work; he’s going to use the president’s staff.

The report will likely conclude that even if there is no evidence of actual voter fraud, the potential for voter fraud and noncitizen voting is there because of inaccurate rolls. Accordingly, they will argue it is necessary to roll back the 1993 National Voter Registration Act (or “motor voter” law)—a law which folks like Kobach hate because among other things it requires states to offer voter registration at public service agencies. They’ll want federal law to do what federal courts have so far forbidden Kobach to do: Require people to produce documentary proof of citizenship before registering to vote. In other words, show us your papers or you can’t register.

Repealing the enfranchising parts of the motor voter law would be a terrible thing, but the good news is that the “electoral integrity” commission’s efforts are already so outlandish and lacking in credibility that it will do nothing to help get the law repealed. Serious Democrats and Republicans know this effort is a sham. This is a faux commission that is not following sound social science or bipartisan principles.

That’s not to say there won’t be an attempt to kill the motor voter law. Indeed, the move toward voter suppression is proceeding apace. Just this week, a House committee voted to defund the United States Election Assistance Commission, a federal agency which is charged with certifying the security of voting machines and coming up with best practices for election administration. And the U.S. Department of Justice is looking to make states enforce the voter purge provisions of the 1993 motor voter law.

But the Trump commission process has been so poorly handled that whatever it concludes will be likely ignored by serious people, even while the president latches onto it to make it harder for people to register and vote. He’s overplayed his hand, and we should be thankful for that.

But a concurring opinion tees up the issue for U.S. Supreme Court review should it choose to review it:

In sum, I concur in the Court’s judgment because I agree with the Court’s application of a case we unfortunately must follow. That said, Beaumont is incorrect and cannot be reconciled with Citizens United, McCutcheon, or, most importantly, the First Amendment. Nor can Texas’s blanket ban on corporate contributions.

The U.S. Supreme Court has turned down multiple chances to overturn Beaumont and allow direct corporate contributions to candidates.

We’ll see if the Gorsuch Court is different. It well might be.

Justin at Take Care on the requests for voter information I expressed concern about yesterday:

In the abstract, the information itself isn’t the real problem.  There are ways that careful researchers engage voter files that can assist and enlighten.  But those researchers don’t just jam hundreds of millions of partial records willy-nilly into a wide-open public pot and stir.  It is wildly irresponsible for a federal entity to ask for all of this information without first discussing how it will be used, and whether collecting it for those purposes is a good idea.

And leave aside, for just a moment, what the commission actually plans to do with the data.  (Kobach apparently thinks he can match the information he collects with other sources to assess the state of the voter rolls.  With the information he’s likely to get, he’ll have profound problems with the accuracy of any conclusions.  More on that here and here, from people who know.  And here, from me.)

What Kobach is asking may also be illegal.

We’ve long had privacy and security concerns about government recordkeeping in this country.  Back in 1974, Congress passed the Privacy Act, regulating how federal government entities keep records.  There are a number of substantive requirements for a body like the Kobach commission.  Those actually include specific limits on data that Kobach has asked for, like voting history and party affiliation. 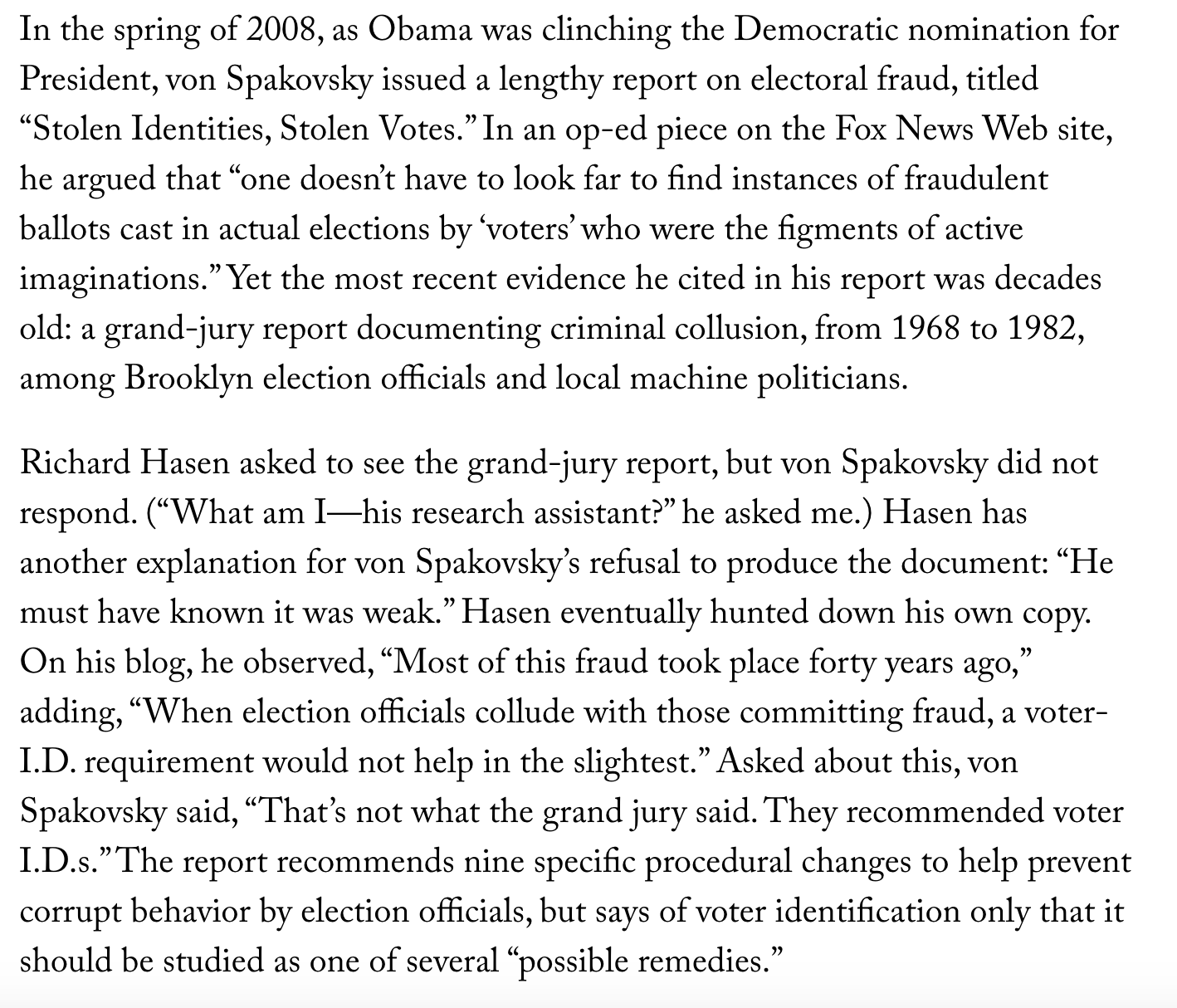