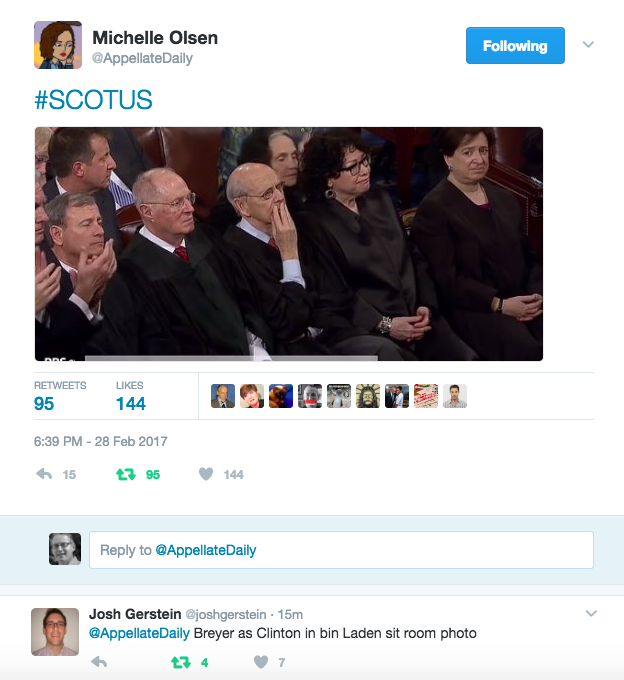 The dispute between the Governor/AG and Legislature as to who speaks for North Carolina and whether its cert. petition can be withdrawn has gotten the Supreme Court’s attention.

There is now a docket notation that the consideration of the case’s cert petition, first set for the March 3 conference, is now “Rescheduled.”

We will see if there is some kind of order related to the fight over who controls the litigation when orders are next released, likely on Monday.

Secretary Husted very likely exaggerates the number of non-citizen registrants and voters. He misleads his constituents about the availability of a reliable and accurate federal database of non-citizens. He fails to explain that the few non-citizens who are registered are, primarily, confused permanent residents.

The result is to reinforce Trump’s repeatedly debunked claim of widespread illegal voting, and further fan the flames of anti-immigrant hysteria. That’s irresponsible, and it’s disappointing behavior from an official who admitted, in January, that “there’s no evidence to support any of [Trump’s] concerns, at least in Ohio.”

Pennsylvania’s congressional district maps are almost certainly the result of gerrymandering according to an analysis based on a new mathematical theorem on bias in Markov Chains developed by Carnegie Mellon University and University of Pittsburgh mathematicians. Their findings are published in the Feb. 28 online early edition of the Proceedings of the National Academy of Sciences (PNAS).

With a nice section on voting rights, in the new NYT Magazine.

Manny Fernandez and Eric Licthblau in the NYT:

The Justice Department remains a party in the case. But it is pulling back at a crucial phase. If a judge finds the state acted with discriminatory intent, as the Justice Department and other plaintiffs have alleged, Texas could be forced to seek federal approval before it makes any changes to its voting laws or procedures. That would have major impacts on voting rules in Texas and be a potent symbol of the ability of the federal government to be a major brake on voting discrimination nationally.

“This is a complete 180-degree turn,” said Danielle Lang, a lawyer for the Campaign Legal Center, one of the groups that sued Texas and represents some of the Justice Department’s fellow plaintiffs in the voter ID case. Under the Obama administration, she added, the Justice Department was “fully committed to the case.”

“They were full partners,” Ms. Lang said. “This was their case as much as ours.”…

Whatever the case, Richard L. Hasen, a law professor at the University of California, Irvine, and an election-law expert said he saw the Justice Department’s action on Monday as “a sign of things to come.”

“This is the first step in what I expect to be a series of steps, with D.O.J. siding with the state of Texas,” he said. He added that by remaining in the case, the Justice Department “could actually do Texas more good than by getting out.”

The practical effect of the Justice Department’s decision is that civil rights groups will continue, without the backing of the federal government, to contest the purpose of the Texas law.

“DOJ’s reversal in position defies rationality after years of vigorously defending the case,” said Kristen Clarke, president and executive director of the Lawyers’ Committee for Civil Rights Under Law, who vowed to continue challenging the Texas law.

The Justice Department, which had wanted more time, had to take a position because of the deadline for the Tuesday hearing on whether the law was intended to be racially discriminatory. The department did not withdraw altogether from the Texas lawsuit. It remains to be seen whether the government will change its position on whether the effect of the law is discriminatory — a separate claim in the lawsuit.