As discussed during this afternoon’s conference call with the Court, plaintiff Democratic National Committee (“DNC”) has uncovered evidence that the Republican National Committee (“RNC”) – contrary to the sworn declarations submitted earlier today, and the clear statements of its counsel – has and continues to engage in one or more ballot security initiatives utilizing poll watchers in Nevada. The enclosed declarations are being provided today pursuant to the Court’s request, and will be discussed more fully in the DNC’s reply submission which will be filed later this week. 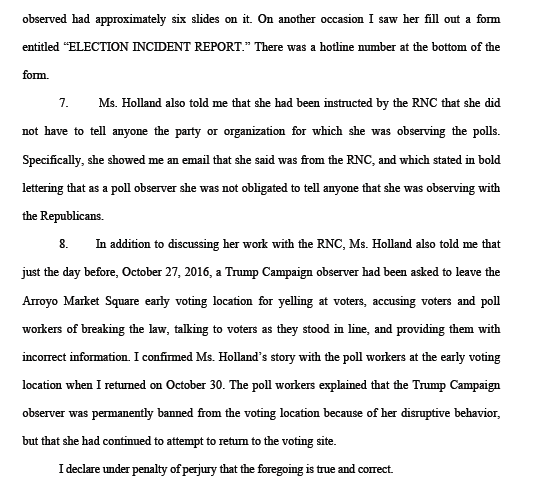 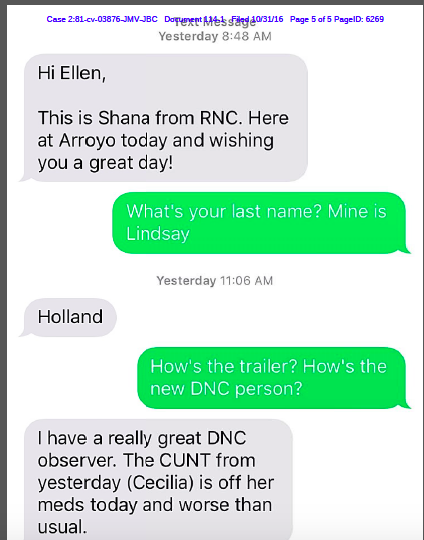 The results of the election could alter these dynamics dramatically. If Clinton wins the White House and Democrats take back the Senate, McConnell and his colleagues will have only one reliable recourse to stop a nominee: a filibuster. (Under no scenario will the Democrats win a filibuster-proof majority of sixty.) In 2013, when Democrats last ran the Senate, Harry Reid changed the rules to prevent the use of the filibuster to block any judicial nomination short of the Supreme Court. Now Reid—who will retire in January—is urging his potential successor as leader, Chuck Schumer, to finish the job and allow nominees to the high court to be confirmed by a simple majority vote. If Republicans “mess with the Supreme Court,” Reid told an interviewer recently, the rules would be changed “just like that.” This, the so-called “nuclear” option, is a strong possibility—a near-certainty, Senator Tim Kaine, Clinton’s Vice-Presidential nominee, said on Thursday. Schumer, for his part, has said that “a progressive Supreme Court” is his “No. 1 goal.”

But to deploy the “nuclear” option Democrats will have to retake the Senate on November 8th. If Republicans hang on to their majority, McCain’s promise to block court appointments will almost certainly become Clinton’s reality. Roosevelt, in the heat of his Supreme Court fight, complained that the conservative justices had drawn “the boundaries of a ‘no man’s land’ where no government can function.” That struggle ended when a swing justice, Owen Roberts, sided with the liberals—the famous “switch in time that saved nine.” But that was a provisional victory. What really resolved the crisis was the retirement of Willis Van Devanter, one of the conservative justices, and his replacement by Senator Hugo Black, who tipped the balance of the Court for more than a generation. Black was a stalwart New Dealer, a defender of Roosevelt, and deeply unpopular among his Senate colleagues. He was confirmed in five days.

Nonprofits that keep donors secret but are closely linked to Democratic and Republican Senate leaders have spent more than $10 million on television, radio and mail ads in key races that may determine control of the Senate, according to reports filed with the Federal Election Commission.
The spending included nearly $3 million in recent weeks by the Democratic-linked nonprofit Majority Forward for television and radio ads in Senate races in Missouri, Nevada and Pennsylvania. The Republican-linked nonprofit One Nation spent nearly $3.2 million on mailings in the same races, as well as those in Indiana, New Hampshire and North Carolina.
The spending on “express advocacy”—calling for votes for or against candidates—came in addition to the groups’ unreported spending earlier in the campaign of about $25 million for “issue ads,” which referred to Senate candidates but didn’t explicitly call for votes.
The nonprofit groups on both sides have also contributed money from undisclosed sources to the super political action committees linked to the parties, including an $11 million last-minute infusion of funds from One Nation to the GOP super PAC Senate Leadership Fund.

The judge rejected much of the discovery sought by the DNC given the time frame, but this should alone should be pretty educational on what efforts are actually going on behind the scenes.

Peter Strauss passes along the obituary:

Norman J. Singer, 78, died on October 31, 2016. He was Professor Emeritus of Law and Anthropology at the University of Alabama, and for 40 years held full tenured professorships in both departments, though he was proud that he never took salary or benefits from Arts and Sciences.

Professor Singer had a wide-ranging international career as well. After graduating from the Wharton School at the University of Pennsylvania, he worked for a year in Stockholm. A trip through Russia and into Iran introduced him to the Middle East. He returned to the States, graduated summa cum laude from Boston University Law School, and in 1964 joined the Peace Corps with his wife, the former Bethany Wasserman. They spent four years in Addis Ababa, Ethiopia where Prof. Singer was a member of the first law faculty in Ethiopia and where two sons were born. Prof. Singer joined the University of Alabama Law School in 1971 and in 1975 received the SJD from Harvard, with an anthropological/legal dissertation on traditional legal systems in Ethiopia.

While teaching full time at UA, Prof. Singer also fitted in numerous projects in countries as diverse as Albania, Cambodia, Croatia, Egypt, Fiji, Iraq, Trinidad, and Zanzibar. He became known as a major expert in restructuring land tenure in countries with poorly-organized or non-existent private land systems. He also took leave from the University to spend 1980-82 as the Ford Foundation Res.Rep. in the Sudan.

Prof. Singer may be best known in the legal world as the author of a treatise, Sutherland, Statutory Construction. In recent years, he has shared authorship with his eldest son, Shambie J.D. Singer.

He was born in Boston to the late Morris and Anna C. Singer. His first marriage ended in divorce. He is survived by his wife, Anna Jacobs Singer, sons Shambie, Jeremy (Nicole) and Micah (Ali), stepdaughters Joanna Jacobs and Stephanie Jacobs, special children Ejvis Lamani, and Anil and Aron Mujumdar, grandchildren Sofia, Avery, and Zeke Singer, and sister Helen Silverstein.

There will be a graveside service at Evergreen Cemetery on Wednesday, Oct 2, at 2 pm.

Here is the complaint. After asserting the law’s unconstitutionality, the complaint states: “Moreover, the California legislature has already repealed the laws that Plaintiffs challenge, illustrating the lack of government interest in their enforcement. But because of the timing of this repeal, the laws continue in effect until January 1, 2017.”

Why did the ACLU wait until a week before the election to seek a TRO?

Following up on a link to Foer’s Slate piece, see Licthblau and Myers:

In classified sessions in August and September, intelligence officials also briefed congressional leaders on the possibility of financial ties between Russians and people connected to Mr. Trump. They focused particular attention on what cyberexperts said appeared to be a mysterious computer back channel between the Trump Organization and the Alfa Bank, which is one of Russia’s biggest banks and whose owners have longstanding ties to Mr. Putin..I. officials spent weeks examining computer data showing an odd stream of activity to a Trump Organization server and Alfa Bank. Computer logs obtained by The New York Times show that two servers at Alfa Bank sent more than 2,700 “look-up” messages — a first step for one system’s computers to talk to another — to a Trump-connected server beginning in the spring. But the F.B.I. ultimately concluded that there could be an innocuous explanation, like a marketing email or spam, for the computer contacts.

But there’s also this:

The most serious part of the F.B.I.’s investigation has focused on the computer hacks that the Obama administration now formally blames on Russia. That investigation also involves numerous officials from the intelligence agencies. Investigators, the officials said, have become increasingly confident, based on the evidence they have uncovered, that Russia’s direct goal is not to support the election of Mr. Trump, as many Democrats have asserted, but rather to disrupt the integrity of the political system and undermine America’s standing in the world more broadly….

A senior intelligence official, who like the others spoke on the condition of anonymity to discuss a continuing national security investigation, said the Russians had become adept at exploiting computer vulnerabilities created by the relative openness of and reliance on the internet. Election officials in several states have reported what appeared to be cyberintrusions from Russia, and while many doubt that an Election Day hack could alter the outcome of the election, the F.B.I. agencies across the government are on alert for potential disruptions that could wreak havoc with the voting process itself.

“It isn’t about the election,” a second senior official said, referring to the aims of Russia’s interference. “It’s about a threat to democracy.”

Glenn Thrush: “Times story says Russians only want to disrupt election — not elect Trump. Then why only hack Dem side?”

“As a career prosecutor and now as Attorney General, I respect the Constitution and would never threaten to prosecute a private citizen who is exercising his or her individual rights.

“No judge has the authority to place a gag order on a private citizen to prevent that person from talking about acts committed against them by the government.

The AG has called for an investigation into later leaks that hurt conservatives.

McClatchy reports. As I’m quoted saying in the article, I don’t believe the issue of legality is settled, despite the 9th Circuit precedent.

Word of the inquiry, which has not blossomed into a full-blown criminal investigation, comes just days after FBI Director James Comey’s disclosure that his agency is examining a new batch of emails connected to an aide to Hillary Clinton.

And it comes a day after Senate Majority Leader Harry Reid criticized Comey’s revelation and asserted that Comey possesses “explosive information about close ties and coordination between Donald Trump, his top advisors, and the Russian government.”

The FBI did not comment. Manafort told NBC News “none of it is true … There’s no investigation going on by the FBI that I’m aware of.” He said he had never had ties to Russian president Vladimir Putin, or had dealings with Putin and his government. He said any suggestion of such ties was “Democratic propaganda.”

Franklin Foer with one of the more bizarre, and worrisome, stories of this bizarre and worrisome election season.

The result here is no surprise, beginning with the late timing.