The Pennsylvania Supreme Court (with three dissents) [links below] has adopted  Nate Persily’s maps for redrawing congressional districts. (One of the districts–18—looks surprisingly like Penn State’s Nittany Lion.) 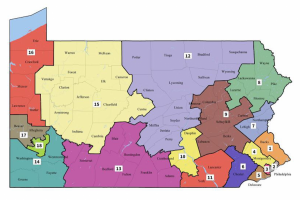 Its plan splits only 13 counties. Of those, four counties are split into three districts and nine are split into two districts. It also includes significant changes to the state map, including dividing Philadelphia into only two congressional districts; currently three House members represent parts of the city.

By contrast the most recent map, enacted in 2011, split 28 counties.

“The  Remedial  Plan  is  superior  or comparable  to all  plans submitted by  the parties,  the intervenors, and amici, by  whichever  Census, provided  definition  one employs,” the court wrote in its order.

The early indications are that this is a much more competitive map which will help the Democrats compared to the gerrymandered maps drawn by the Republican legislature. Given Nate Persily’s general reputation for fairness, I expect that these maps will be fair and comply with the requirements set out by the state Supreme Court.
Because this was a case decided under the state constitution by the state supreme court, the usual path for review of this case by the U.S. Supreme Court is limited. The only plausible argument I see is that the maps violate the Elections Clause of the Constitution, which vests in the state legislature the power to choose rules for congressional elections (unless Congress acts to preempt them).
The problem with this argument is that the Pa Republicans already went to the Supreme Court when the state supreme court announced a redistricting– and Republicans raised the very same argument. At the time it was raised, I called the argument a long shot, given a line of cases (most recently a 2015 case from Arizona) reading the word legislature much more broadly in the context of the elections clause. The emergency stay request went to Justice Alito, who denied it without even referring it to the Court. So he likely did not think much of it at the time.
Now it is quite possible that Pa. Republicans will go back to Justice Alito, arguing that things are even worse now that the state Supreme Court has adopted a map itself. That’s the job first and foremost for the legislature. But remember that the Pa. legislature did not even come up with an official passed plan for the state supreme court to reject. (A pair of legislative leaders had a plan, but it was not passed by the legislature.) This seems to give Pa. Republicans even less standing to complain about things. I expect something new filed with Justice Alito will get no further. (After all, we are even later into the election season.)
The alternative, which I’ve been hearing a lot about from reporters, is Pa. Republicans filing a new and separate federal court challenge in a federal district court raising the same Elections Clause challenge. This seems like a super longshot. Not only does it present the same problem on the merits as what Justice Alito already rejected. But this would be a collateral attack on a state supreme court decision in federal court (rather than a direct appeal from the state Supreme Court to the U.S. Supreme Court). Various abstention doctrines, including the Rooker-Feldman doctrine, would counsel federal courts against issuing orders directly against the orders of state courts. There are principles of comity and federalism that make such challenges extremely hard to bring.
Bottom line: it is hard to see where Republicans go from here to successfully fight these maps.
[This post has been updated.]
[This post has been corrected to note that Persily is an advisor to the court, not a special master.]
Files:‌