Yesterday was the deadline for parties to submit their proposed remedial maps in the ongoing litigation over Pennsylvania’s congressional plan. In sum, seven maps were submitted: two by the plaintiffs, one by the governor, one by the lieutenant governor, one by Pennsylvania House Democrats, one by Pennsylvania Senate Democrats, and one by a group of intervenors. (The state’s Republican legislative leaders also submitted their map a few days earlier.)

All of these maps perform better in terms of traditional redistricting criteria than the enacted Pennsylvania plan. Their districts are more compact, and they split fewer towns and counties. To evaluate the maps’ partisan implications, we uploaded them on PlanScore. (For more on PlanScore, see my post from earlier this week.)

As the below chart indicates, the maps vary widely in their likely efficiency gaps. The Republican leaders’ proposal (like the enacted plan) preserves a double-digit Republican advantage. Three maps (from the governor, the lieutenant governor, and the Senate Democrats) have smaller but still substantial pro-Republican skews. And three maps (from the House Democrats and the plaintiffs) are almost completely symmetric. 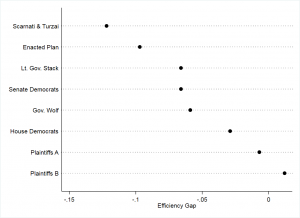 Beyond showing that maps can be assessed quickly using PlanScore, this exercise has two points. First, it reveals that even when traditional criteria are followed (more or less), maps can still have very different partisan consequences. So it is not enough to say that we want an aesthetically attractive map; we also have to specify what kind of aesthetically attractive map we want: one that is skewed in favor of a party or one that is symmetric.

Second, this analysis means that the Pennsylvania Supreme Court will soon have to clarify its conception of partisan gerrymandering. In its decision, the court sometimes defined gerrymandering as drawing district lines with partisan intent and effect. But at other times, the court seemed to understand gerrymandering exclusively as disregard for traditional criteria, regardless of the partisan implications. Under the latter notion, all of the proposed maps are acceptable because all of them are much more compliant with traditional principles than the enacted Pennsylvania plan. But under the former definition, only a few of the proposals actually correct the partisan skew of the enacted plan.

(Two small methodological notes: The intervenors did not provide the necessary files for their proposed map to be evaluated. And all of these asymmetry scores were generated without considering incumbency; as I noted previously, we’re still working on enabling users to incorporate incumbency effects when they upload maps.)