While the world waits for the Supreme Court’s decision in Whitford, another partisan gerrymandering trial wrapped up last week in Greensboro, North Carolina. This case, LWVNC v. Rucho, involves North Carolina’s congressional map, and is just the second of its kind to make it to trial. The case also differs in some notable respects from Whitford, which I thought I’d briefly highlight.

1. While discriminatory intent had to be inferred in Whitford, it was essentially admitted by the State in LWVNC. The “Adopted Criteria” used to design the map (and reproduced below) stated outright that “the partisan makeup of the congressional delegation . . . is 10 Republicans and 3 Democrats.” The Adopted Criteria added that “the only data . . . to be used to construct congressional districts shall be election results.” 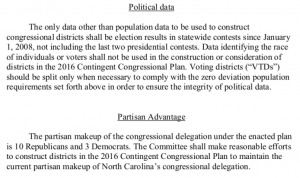 2. While the Whitford plaintiffs focused on the efficiency gap, the LWVNC plaintiffs introduced evidence about several measures of partisan asymmetry: the efficiency gap, partisan bias, and the mean-median difference. As the charts below show, these metrics agree that North Carolina’s 2016 plan (like its 2011 plan) is one of the most asymmetric congressional maps in modern American history. 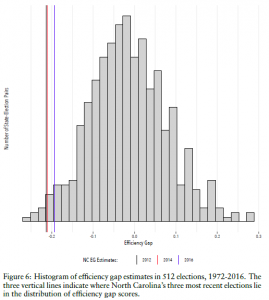 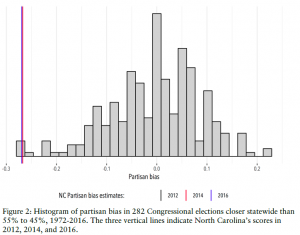 3. Because North Carolina has just thirteen congressional districts, it was possible for the LWVNC plaintiffs to demonstrate cartographically how this enormous asymmetry was generated. Throughout the State, clusters of Democratic voters were either split between Republican districts (as in Asheville and Greensboro) or packed into overwhelmingly Democratic districts (as in Charlotte and the Triangle). 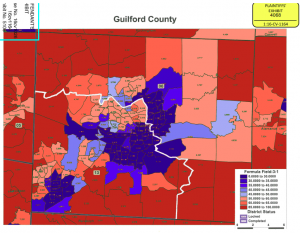 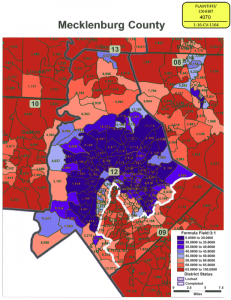 4. District map simulations showed that the 2016 Plan’s asymmetry cannot be explained by North Carolina’s political geography. Among thousands of simulated maps, all matching or surpassing the Plan’s performance in terms of the (nonpartisan) Adopted Criteria, not one had an efficiency gap as large as the Plan. The modal simulated map had an efficiency gap of exactly zero. 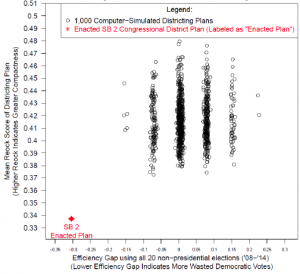 5. Unlike in Whitford, there were two sets of plaintiffs. The LWVNC plaintiffs (whom I help represent) advocated a three-part test requiring (1) discriminatory intent; (2) a large and durable discriminatory effect; and (3) no legitimate justification for this effect. Common Cause also recommended an intent-only standard similar to the one proposed by Justice Stevens in Vieth and the appellants in LULAC. The trial court thus has a menu of options to choose from.

Interestingly, the trial court denied the State’s motion to stay the case pending the Supreme Court’s decision in Whitford. It’s thus possible that the trial court will add its voice to the legal conversation about partisan gerrymandering, even before Whitford is handed down.