The next article I’d like to flag is Jowei Chen’s forthcoming piece in the Election Law Journal, The Impact of Political Geography on Wisconsin Redistricting. In it, Jowei applies his simulation technique to the Wisconsin Assembly, randomly creating 200 district maps without considering any electoral data. As the below chart indicates, all of these maps both improve on the enacted plan in terms of traditional districting criteria and exhibit much smaller efficiency gaps. Indeed, fully three-fourths of the simulated maps have efficiency gaps within three percentage points of perfect neutrality. 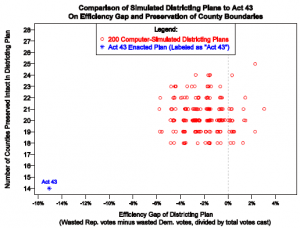 The implications of these results are easily grasped: Wisconsin’s political geography does not significantly favor either party in redistricting for the Assembly. If it did, that edge would be evident in the simulated maps. Therefore the spatial patterns of Wisconsin’s voters cannot justify the enormous efficiency gap exhibited by the enacted Assembly plan.

Because Jowei’s work has recently been the subject of discussion on this blog, I thought I’d make a few more points about it. First, in this analysis, he abided by more constraints than just equal population, contiguity, and compactness. Each of his simulated Assembly maps also split fewer counties and municipalities than the enacted plan, and complied with the Voting Rights Act by preserving the majority-minority districts ratified in earlier litigation. Each of the simulated maps thus satisfies all federal and state requirements.

Second, Jowei’s simulations help to show how the enacted plan’s Republican advantage was achieved. The below chart plots both the actual Assembly districts and ranges for the simulated districts from least to most Republican. In the first few districts on the left, the packing of Democratic voters is apparent. Several actual districts are more heavily Democratic than any simulated district. Next, in the middle of the chart, the cracking of Democratic voters is unmistakable. There are about a dozen Republican districts that would have been won by Democrats in almost all of the simulations. On the right side of the chart, lastly, there is clear evidence of Republican un-packing. There are substantially fewer heavily Republican districts in the actual plan than in any simulation. 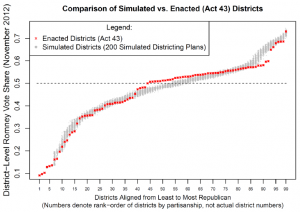 Third, one can be agnostic as to whether Jowei’s simulated maps are drawn randomly from the universe of lawful Assembly maps, and yet still find the simulations highly probative. If the simulations are unrepresentative, one would not want to assign too much weight to their precise distribution: their median, say, or the shares of maps that fall on each side of 0%. Nevertheless, one could conclude that there exist hundreds of lawful alternatives to the enacted plan, all superior in terms of both compliance with traditional criteria and partisan fairness. The very existence of these alternatives is relevant to whether the enacted plan’s asymmetry can be justified—even if one is unsure about the alternatives’ representativeness.

And fourth, the growing availability of district map simulations (by both Jowei and other scholars) makes possible an appealing two-stage sequence for quantitatively evaluating plans. In the first stage, a plan would be assessed relative to a benchmark of perfect neutrality, using measures like partisan bias, the efficiency gap, and the mean-median difference. In the second stage, a plan would be compared to a large number of simulated maps, all at least matching the plan in terms of traditional criteria but designed without any reliance on electoral data. Liability would follow only if a plan was asymmetric both absolutely (compared to a zero baseline) and relatively (compared to the simulations). This approach, of course, is exactly what the Whitford plaintiffs have proposed.