A pending Supreme Court case is often the impetus for exciting new scholarship. With the Court about to hear Gill v. Whitford, its first partisan gerrymandering case in more than a decade, it’s no surprise that a number of notable articles have recently been written. In this post and in a few more over the coming days, I’ll highlight some of these papers. I’ll summarize their contributions and then explain how they relate to the issues raised in Whitford.

I’ll start today with Eric McGhee’s newest piece, Measuring Efficiency in Redistricting, which is forthcoming in the Election Law Journal. Eric shows algebraically that the efficiency gap—the measure of gerrymandering he developed, and one of several such metrics cited by the Whitford plaintiffs—is usable in just about every electoral context. Whether a state is competitive or dominated by a single party, whether district-level turnout is roughly equal or highly divergent, and whether there are two or more than two parties, the efficiency gap can be calculated and yields meaningful results. This means the measure can be employed not just in competitive two-party states like Wisconsin, but in almost all American jurisdictions.

Eric also probes a number of variants of the efficiency gap that have recently been proposed. For example, the dissenting trial court judge in Whitford suggested that “surplus” votes should be tallied relative to the losing candidate’s performance in a district, not the 50%-plus-one threshold that’s necessary for victory. Others have floated the ideas of omitting surplus votes entirely or equalizing the parties’ respective shares (rather than numbers) of wasted votes.

To assess these alternatives, Eric examines how often they violate the “efficiency principle” in redistricting simulations. This principle states that a measure should register an improvement in a party’s position if it wins an additional seat with the same overall votes. The principle captures what many people mean when they refer to gerrymandering: manipulating district lines to seize more seats without earning more votes. 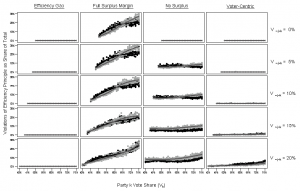 It is immediately evident that only the original efficiency gap never violates the efficiency principle. All of the variants run afoul of the principle in at least some electoral contexts. (The Whitford dissenter’s proposal performs particularly poorly, even in the absence of differential turnout or a third party.)

These findings are helpful because they mean there is no reason to proliferate additional versions of the efficiency gap. The original formulation works perfectly well—indeed, better than all of the alternatives that have been offered to date. Scholars, litigants, and courts may therefore rely on a single efficiency gap metric rather than a plethora of further options.