A few more points to add to the analyses by Rick H., Rick P., and Justin:

1. Ever since Gingles itself, it has been an open question whether the mere fact of racial polarization in voting suffices to satisfy the case’s second and third prongs. (Justice Brennan’s opinion said yes, but it commanded only four votes on this issue. Some lower courts—including the Fifth Circuit—subsequently held that the prongs are not satisfied if partisanship explains racial polarization.)

Today the Court strongly suggests that the causes of racial polarization are irrelevant. In the Court’s long discussion of crossover voting in District 1, it does not mention a single potential explanation for voter behavior: not partisanship, not racial animus (or its absence), not socioeconomic characteristics, not anything. Instead, the Court relies exclusively on the raw election returns, which indicate that substantial crossover voting must be occurring since black-preferred candidates consistently won elections with ~65% of the vote even though blacks made up only ~48% of District 1’s population.

Going forward, I expect that Section 2 plaintiffs will be able to use the Court’s discussion as a powerful rejoinder to any argument that racial polarization should not “count” for Gingles purposes if it is the product of some non-racial factor. This should make it significantly easier for plaintiffs to satisfy the Gingles preconditions, especially in areas (like the Fifth Circuit) where courts had previously probed quite rigorously the reasons for racial polarization.

Several implications follow. First, jurisdictions that are successfully sued under Section 2 should be able to design crossover districts as a remedy for the violation. Second, Section 2 suits should fail if they are used to challenge existing crossover districts (in an effort to replace them with majority-minority districts). And third, as in Cooper, jurisdictions should not be able to use Section 2 compliance as a defense in a racial gerrymandering case if they convert crossover districts into majority-minority districts. Arguably, all of this was implicit in Bartlett, but it’s still important to see the Court providing confirmation.

3. Finally, there are many majority-minority districts, both in the South and elsewhere in the country, where functioning crossover districts could be drawn instead. In an article a few years back, I created the below density curve of minority population share in all districts (congressional and state legislative) in states previously covered by Section 5. The distribution is clearly bimodal, with one of its peaks around 60% minority voting age population. The district distribution also looks nothing like the underlying distribution of minority population share at the precinct level, which is unimodal and normal in shape. This suggests that the district distribution—with its many majority-minority districts—is the product of intentional racial redistricting.

Of course, the mere fact that a crossover district could have been drawn in an area where a majority-minority district was drawn instead does not establish that race was the predominant factor in the district’s creation. The plaintiffs in Cooper had much more damning evidence than that, including the use of an explicit racial target. Nevertheless, it is certainly relevant that many majority-minority districts are more “packed” than they need to be to comply with Section 2—likely intentionally in many cases. This means that Cooper’s reach could be greater than that of the racial gerrymandering cases the Court has previously decided this cycle. 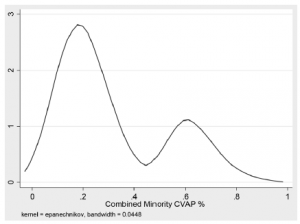