This morning Donald Trump tweeted: “Hillary Clinton should have been prosecuted and should be in jail. Instead she is running for president in what looks like a rigged election.” People in the media and broader society are suddenly concerned that Donald Trump is now threatening the core of our democracy: rule of law and the belief in the peaceful transition of power across presidential administrations.

But this is nothing new. See my October 1 post, Trump’s Irresponsible Vote-Rigging Statements Literally Putting Our Democracy at Risk. Or back on August 20th, when I had a post with this accompanying picture: 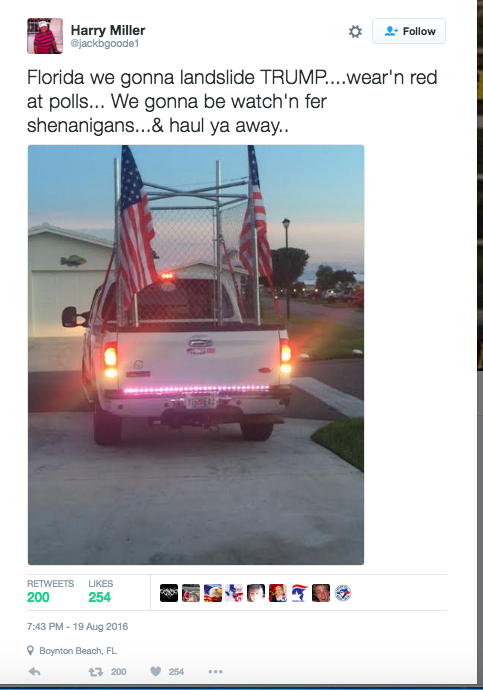 Trump has been making these statements for months, essentially claiming without any credible evidence whatsoever that racial minorities and labor unions in Democratic areas like Philadelphia will use voter impersonation. Trump’s comments are a natural outgrowth of the kind of voter fraud hysteria we’ve seen from some Republicans for the last decade and a half.

Trump’s comments are especially dangerous because he is encouraging his supporters to take matters into their own hands. He’s telling his supporters to go to “certain areas” looking for fraud at the polls. This means a real risk of voter intimidation even if Trump himself organizes nothing. There will be people in red shirts marching to the polls.  Consider these comments from a Boston Globe article today.

His supporters are heeding the call.

“Trump said to watch you precincts. I’m going to go, for sure,” said Steve Webb, a 61-year-old carpenter from Fairfield, Ohio.

“I’ll look for . . . well, it’s called racial profiling. Mexicans. Syrians. People who can’t speak American,” he said. “I’m going to go right up behind them. I’ll do everything legally. I want to see if they are accountable. I’m not going to do anything illegal. I’m going to make them a little bit nervous.”

Some Trump supporters say that if he doesn’t win, they figure the United States government will be no better than dictatorships where elections cannot be trusted.

“We’re heading toward North Korea, without a doubt,” said Grant Reed, a Trump supporter wearing a shirt that said, “If you’re offended, I’ll help you pack.”

What can be done? Ned Foley nails it for what should happen if Trump fails to concede: “To my mind, what will be key is the conduct and statements of Paul Ryan and Mitch McConnell as the leaders of the Republican party in Congress.  If they publicly concede that Trump has lost, and the media appropriately reports the significance of their concession, the nation’s democratic system can take that as the requisite sign of closure, whatever antics Trump might engage in.”

But Ryan and McConnell need to STEP UP NOW. They should not be wimps. They should condemn this rhetoric as dangerous and say that we all, Democrats and Republicans and those of minor or no parties, support the rule of law. We will all accept the results of the election. And Donald Trump’s comments are dangerous and irresponsible.

And then after the election, maybe Republicans like Kit Bond, McConnell and Ryan can do some soul searching and call off the dangerous voter fraud rhetoric that got us here in the first place.