The new commercial begins with the words: “In Hillary Clinton’s America, the system stays rigged against Americans.”  This part of the commercial features two pictures, the first a polling place with the words “vote here” and the second with a picture of people waiting on line, apparently a long voting line.  Here are two screenshots: 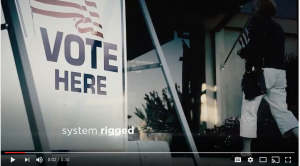 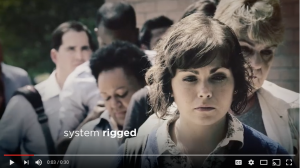 There is enough innuendo here that it is not clear precisely what he is saying, but it is enough of a dog whistle to those who believe that Democrats are stealing elections.

But as I explain in this LA Times oped, Trump has offered no evidence of vote rigging the way he’s claimed, and under a fair definition of vote rigging, it is Trump, with his plans to send people in the polls on election day, who presents the greatest danger of rigging.