The following is a guest post from Lindsey Cormack:

On the morning of the New York presidential primary, Lieutenant Governor and former House Representative, Kathy Hochul did what many other excited voters across the state would do over the course of the day: live tweet her civic engagement. 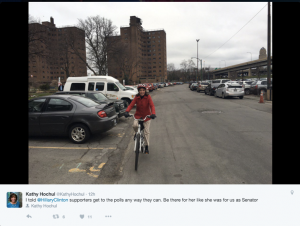 Lt. Governor Hochul started with a bike ride to her voting center.

She then took and posted a picture of the entrance of her polling station. 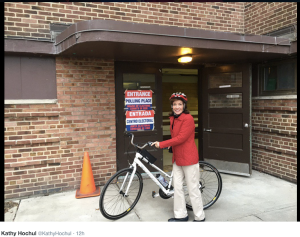 She then posted a picture of her blank ballot featuring candidate Hillary Clinton (this picture was subsequently removed). Everything Lt. Governor Hochul posted thus far shows support for democratic processes and is accordance with the law. Hochul likely tweeted the pictures in the hope that her constituents and followers would exercise their right to vote.

And then things became a bit more complicated.

Lt. Governor Hochul posted a picture of her ballot with the Hillary bubble filled out and proclaimed that she was proud to have voted for the former Senator. 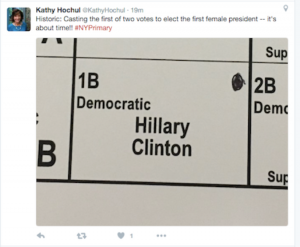 note: this picture was later deleted from Representative Hochul’s twitter account but was captured via screenshot prior to the deletion.

This last act is a misdemeanor.

17-130. Misdemeanor in relation to elections. Any person who:

as to reveal the contents, or solicits a voter to show the same; or,

connection  with his ballot with the intent that it may be identified as the one voted by him; or,

is guilty  of a misdemeanor.

Hochul, with her photo and subsequent tweet clearly violate this law. All of this happened within the first three opening hours of New York polling stations.  At 9:00 a.m. I walked into my Judicial Politics class, explained to the students that we have a law prohibiting selfies with a filled out ballot, and asked them why they thought such a law would exist.

The first response was that it might allow for undue influence if people of notoriety did this sort of thing. Another student quickly chimed in to say that famous people are free to share their political preferences on any social media platform so that probably was not the reason for such a law.

A second student offered an explanation centering on the notion of a voting booth as a private place, and that perhaps actions within that sort of environment should be kept private. When pressed further, it was unclear what further logic would explain why there would be statutes preventing self-taken photographs in a private space, as opposed to just statutes prohibiting someone else from recording what happens in a private space. At this point in the similarities between what happens in a voting booth and a toilet stall were pointed out – I will not retell the analogies but assure you there were many.

After this digression we got back to thinking about why it ought be illegal to take a selfie featuring a completed ballot. The reason they came to eventually was mostly correct. If it is illegal to record and disseminate pictures of a completed ballot associated with the person responsible for completion, it is harder for people attempting to buy or coerce votes to follow through on threats if a given voter does not do the bidding they were coerced into doing.

Professor Richard Hasen has gone into great detail on the how the problematic craze of public oversharing of voting details can corrupt the process. And while it is not likely that Lt. Governor Hochul was bought or coerced, it is important that citizens not work to create a norm that may undermine the freedoms that provide citizens with things like the private ballot and the awesomeness of internet-connected smart phones.

Should any legal action be taken against Hochul? Probably not. Would it be possible for authorities to take such action? Sure, and it appears that she is aware of that. After questions were raised about potential illegality of her photo and tweet on social media, she removed her original post.

Should U.S. citizens, including elected representatives in government be more mindful of unintended consequences of living all parts of life though social media? Yes. Every so often we can learn from an act without large immediate consequences, let us take this opportunity to do so.

Cormack is an assistant professor at Stevens Institute of Technology. She maintains the DCInbox project of every official House and Senate e-newsletter at www.dcinbox.com.