The following is the third of five guest posts by Ned Foley of Ohio State, about his new book Ballot Battles: The History of Disputed Elections in the United States: 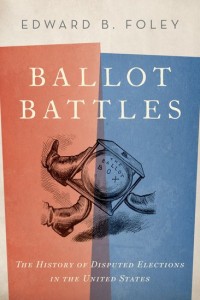 Theme Three: Throughout American history, there has been an important interplay between institutions and individuals in terms of the capacity to resolve vote-counting disputes in accordance with a basic standard of fairness and integrity.  Insofar as the institutions for adjudicating these disputes have been weaker than desirable (in large part because of the oversight at the Founding, as described in the first post), the political system inevitably places greater reliance on the ethical judgments of individual politicians who play critical roles in the handling of these disputes.  Conversely, to the extent that institutional improvements occur that increase the capacity for impartial adjudication of these disputes, there is correspondingly less dependence upon the particular character and virtue of individual politicians.

This dynamic has been at work since the beginning.  In 1806, when the Massachusetts legislature had the authority to count ballots in the state’s gubernatorial election, the dominant party in the legislature—including Joseph Story, the future Supreme Court justice who was a member of the state’s house of representatives at the time—concocted a brazen plan to manipulate the count in order to defeat the electorate’s will and put their party’s candidate in power.  But overnight leaders of the plot, including Story (at least to some extent), thought better of their nefarious plan and decided to back down.

In other instances, partisans in power had no such second thoughts and went ahead to pilfer an election through vote-counting distortions.  One reason why the so-called “Bloody Eighth”—the term given to the dispute over the election for Indiana’s eighth congressional district in 1984—was so divisive, and produced such long-lasting enmity in Congress, is the perception on the part of Republicans that Democrats had abused power in just this way.  If an impartial institution had existed to adjudicate the dispute, Democrats never would have been in a position to change the rules for counting ballots just as their candidate pulled ahead.  But the temptation apparently was irresistible at that moment of political competition, leading to the Republican charge that Democrats breached a basic standard of fair play.

The most precarious moment when institutional inadequacy caused the political system to hang on individual character occurred at the end of the Hayes-Tilden dispute.  On March 1, 1877, just three days before the scheduled inauguration of the new president on March 4, the entire process of counting Electoral College votes from the states threatened to derail because of a surprise development over Vermont.  You can read Ballot Battles for full details of the drama (and they were indeed dramatic), but the key point is that a logjam developed that neither the Constitution nor the applicable statute specified how to handle.  Hardliners within the Democratic party wanted to freeze the whole process unless and until they got their way on how to handle Vermont.  They even threatened to assert the power of the House of Representatives under the Twelfth Amendment to elect the president directly.   But Samuel Randall, the Speaker of the House and himself a Democrat—Tilden’s man in the House, who had been elected Speaker to push Tilden’s claim to the presidency—would not risk letting the nation go over this constitutional cliff.  He was determined to see the count concluded before March 4, even if it meant Tilden’s defeat.  In order to prevail, he had to call out the Sergeant-at-Arms against members of his own party and to refuse to let the House take a critical vote on whether the hardliners should have their way on Vermont.

Randall saw his conduct at that critical juncture on March 1 as a matter of “conscience,” and many nineteenth century observers viewed him has the key hero of the whole Hayes-Tilden saga.  Too bad there is no a schoolchild in America who learns of what he did that fateful day.  We are fortunate that we can only speculate on what might have happened if he had not held his ground.

The prospect of two separate inauguration ceremonies—one based on a House declaration that it had elected Tilden under the Twelfth Amendment, the other based on the President of the Senate (a Republican) purporting to declare Hayes the winner of enough Electoral College votes—is unnerving, even at this historical distance.  It is certainly unsettling to think that the country could sometime again face the situation where a disputed presidential election depended upon the personal character of the Speaker of the House.  Would it not be better to adopt an institutional reform that put the outcome of the presidential election in the hands of a more impartial body?