The West Virginia Judicial Investigation Commission has issued an ethics opinion clearing state Supreme Court Justice Robin Davis of wrongdoing in response to an ethics complaint filed earlier this year regarding the justice’s failure in 2012 to disclose a $1 million jet airplane deal between her husband and an attorney appearing before her….

Further, the opinion said the ethics complaint was based on “unprincipled allegations made by  those involved in creating the so-called ABC News story.”

“The commission does not accept as proof allegations made in the mass media,” Wilson wrote.

The commission also included criticism of Hofstra University Law Prof. James Sample, though not by name, instead referring to him as an “expert” in quotation marks. Sample appeared in the ABC News report, and said he felt Davis had not fulfilled her obligation to disclose the private business transaction.

Reached Wednesday, Sample said he did not want to get into a war of words with the commission. But he did defend his credentials as a recognized expert who has published numerous papers and spoken widely on judicial ethics. Widely-known judicial expert Richard Hasen, a Professor of Law and Political Science at the University of California, Irvine, recently referred to Sample as the author of “some of today’s most important work on judicial elections and judicial recusal” in the country.

“My credentials are quite well established,” Sample said.

“If they didn’t see a conflict in this situation, I’d look at where their oversight comes from,” Sample said, noting that the commission’s nine members are all appointed by the West Virginia Supreme Court.

You can read the sycophantic opinion at this link (via How Appealing). Here’s my favorite part: 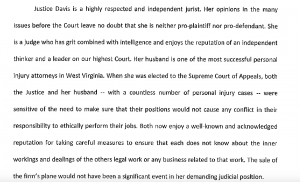