Republican congressional candidate Tom Emmer has released what might be the most unusual ad of the political season for the open seat in Minnesota’s Sixth District. In it, Emmer stands in front of a Tom Emmer for Congress sign and makes a pitch — not for himself, but for a local remodeling company.

Freedom Partners, a nonprofit organization that raised more than $250 million and provided nearly all of it grants to conservative groups before the 2012 election, told the Internal Revenue Service in an application for tax-exempt status that it expected to raise and spend only $2 million and didn’t “plan to influence any election.”

Freedom Partners actually took in nearly $255 million and provided nearly $236 million in grants in the year that ended just before the Nov. 6, 2012, election, according to its first Form 990 tax return, recently posted online (3599 Money & Politics Report, 9/18/13).

I have written The Next Citizens United? The campaign finance case at the Supreme Court next week will be big—or huge. for Slate.  It begins:

Sometimes at the Supreme Court, it is not if you lose, but how. That principle will be on full display in McCutcheon v. Federal Election Commission, the campaign finance case the Supreme Court will hear next Tuesday, the second day of the new term. If the government loses big, it could mark the beginning of the end of any limits on campaign contributions given directly to candidates in federal, state, and local elections.

Citizens United and the rise of super PACs are already flooding the election system with money. But so far we’ve managed to keep a little distance between the money and the candidates themselves. If hard-line conservatives get their way, that distance will evaporate, and soon you could write a multimillion-dollar check that would go right into a candidate’s bank account. The question is whether Chief Justice John Roberts will hold back the conservative majority back from the brink—though if he does, Justice Antonin Scalia will surely taunt him for it.

A few months ago I posted a draft paper, Political Dysfunction and Constitutional Change. It generated some interesting responses, including this Salon piece from Jonathan Bernstein.

I have now posted the final draft of the paper, which is appearing in a Drake Law Review symposium on political dysfunction. The final version includes data through the 2012 elections on public attitudes about divided government and the extent of split-ticket voting.  (Split ticket voting at lowest level since at least 1952, but sizable portion of public says they want divided government—the paper explains this apparent paradox.)

Here’s are two  of the charts: 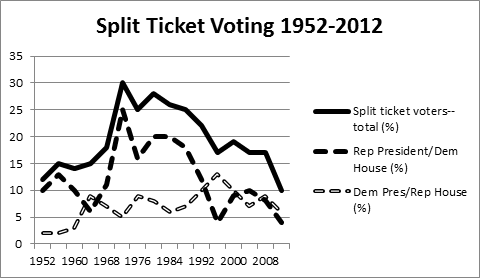 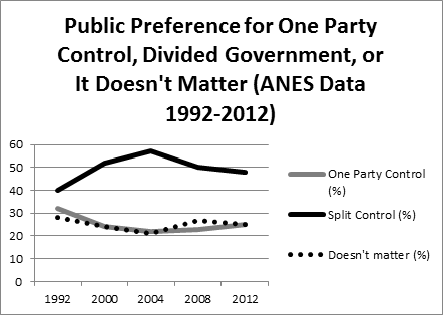 Here is the abstract:

This Essay was prepared for a symposium at Drake Law School on “The U.S. Constitution and Political Dysfunction: Is There a Connection?” Signs of political dysfunction abound in the United States government. Perhaps the best illustration is the ongoing fight over the U.S. budget, the national debt, and tax and entitlement reform , which has led to extraordinary (and so far unsuccessful) efforts to resolve legislative stalemate including the “super committee” and the sequester. The source of these deadlocks over budget reform is hardly a mystery: it is the mismatch between highly ideological political parties and our divided form of government which makes passing legislation difficult even in the absence of partisan deadlock. The partisanship of our political branches and mismatch with our structure of government raise this fundamental question: Is the United States political system so broken that we should change the United States Constitution to adopt a parliamentary system either a Westminster system as in the United Kingdom or a different form of parliamentary democracy? Such a move toward unified government would allow the Democratic or Republican parties to act in a unified way to pursue a rational plan on budget reform on other issues. Voters could then hold the party in power accountable if the programs its pursued were against voter preferences. It seems a more logical way to organize politics and insure that each party will have a chance to present its platform to the voters, to have that platform enacted, and to allow voters at the next election to pass on how well the party has managed the country. But changing the Constitution is a big deal.Even if a sense of national crisis and paralysis allowed an opening for parliamentary constitutional change, we should not lightly change the fundamental rules of our governance. There is a value to our constitutional tradition. Change can have unintended consequences. The country has weathered many crises under our existing form of government, and tinkering with long-term success, even given profound recent dysfunction, can be dangerous.

In this Essay, I briefly examine four arguments against making constitutional change to deal with current political dysfunction. The first two arguments contend that the current governmental system is not that dysfunctional. First, the current political stalemate may reflect the preferences of the median voter or the public at large. Second, the current political system actually produces a good amount of legislation, and a parliamentary democracy might produce too much rash legislation. The third argument accepts the premise that the current system is dysfunctional, but contends the dysfunction could be cured by sub-constitutional change, such as eliminating the filibuster or adopting additional open primary systems to produce more moderate candidates. The fourth argument also accepts the premise that the current system is dysfunctional, but sees that dysfunction as temporary, and expects dysfunction to be self-correcting as voters reject the current Republican Party far from the median voter, leading the Republican Party, and then Democrats, to move to the center. Evidence supporting the first three of the arguments against constitutional reform is conflicting and somewhat weak, but that the fourth argument is plausible and hard to evaluate in the midst of a potentially transformative era. We are in the middle of a highly partisan moment in American history but it is hard to know how long it will last. I conclude it is worth waiting to see if the political system self-corrects, especially given the risks of tinkering with the constitutional system and the value of not changing our constitutional traditions lightly. Given current political dysfunction which would block a move toward a parliamentary democracy in any case, waiting not only prudent but unavoidable.

The Texas Tribune has the interesting story.

Ned Foley has posted this draft on SSRN (forthcoming, Oklahoma Law Review).  Here is the abstract:

Akhil Amar, at the end of AMERICA’S UNWRITTEN CONSTITUTION (2012), mentions the idea of postponing for a long while the date on which newly adopted constitutional reforms become effective. The rationale for this idea, as Amar explains, is to impose a Rawlsian “veil of ignorance” on the adopters of the constitutional reforms, so that they have less ability to act strategically on behalf of their own descendants. This essay develops how Amar’s idea might best be operationalized. In doing so, it proposes the creation of a nonpartisan Posterity College, with each state sending the same number of members as the state has in the Electoral College. The nation’s two immediate past presidents from different political parties (now Clinton and Bush) would serve as the bipartisan co-chairs of this Posterity College. The essay discusses the procedures that this Posterity College would use for its deliberations, how its members would be appointed, some of the potential reforms it might consider, and how its proposals would become part of the Constitution but taking effect only long afterwards.

NY Times: “The numbers are attention-getting: on Tuesday, New York City will spend about $13 million to hold a runoff in the Democratic primary for an office, public advocate, that is budgeted only $2.3 million a year. And the combination of a little-known post with a little-understood election process is expected to lead to startlingly low turnout — maybe 100,000 to 175,000 voters, in a city of 8 million people. Yet the election is likely to determine the occupant of one of the city’s top offices, because there is no Republican candidate. The high cost of an election for a low-cost office has inspired wags to muse. Some have suggested that the race be decided by a coin toss. Others, including the Republican nominee for mayor, Joseph J. Lhota, have joked that, because the public advocate has few concrete powers, the two candidates could be allowed to serve, at a saving to taxpayers.”

The Justice Department is expected to sue North Carolina on Monday over its restrictive new voting law, further escalating the Obama administration’s efforts to restore a stronger federal role in protecting minority voters after the Supreme Court struck down part of the Voting Rights Act, according to a person familiar with the department’s plans….

North Carolina’s law cut back on early-voting days, eliminated the ability of people to register to vote on the same day as casting an early ballot, and prohibited the counting of provisional ballots cast by eligible voters who went to the wrong precinct.

It also requires voters to present photo identification to cast ballots, but does not allow student IDs, public-employee IDs or photo IDs issued by public assistance agencies. Black voters in North Carolina are disproportionately likely to lack identification issued by the State Department of Motor Vehicles, according to state data.

All four provisions are being challenged by the Justice Department, the person familiar with the plans said.