I’ve heard a number of defenses for cutbacks in early voting and elsewhere, such as, it’s the state’s prerogative to set these hours (and if Democrats can add them why can’t Republicans cut them?), that voting too early means you get more uninformed voters, that it is an administrative hassle, even that voting should not be too easy because hard rules weed out uninformed voters (I critique that argument here).

But note that the NC GOP is now trying to mobilize GOP voters to work for cutbacks in early voting to prevent voter fraud.  From Gerry Cohen: 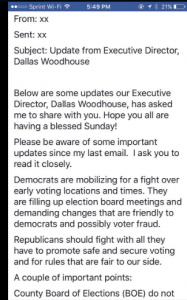 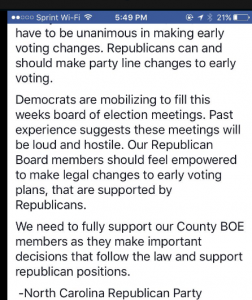 This is the kind of stuff that may get North Carolina under federal supervision for voting again.