If @TedCruz doesn’t clean up his act, stop cheating, & doing negative ads, I have standing to sue him for not being a natural born citizen.

It is possible that Trump could sue a registrar of voters who lists Ted Cruz on the ballot, arguing that Cruz is not eligible to be President. That is the kind of suit which does have the possibility of going forward. (Certainly if Cruz were excluded from the ballot by a registrar who said Cruz is ineligible, Cruz would have standing to sue over that).

UPDATE: Trump could well have competitive standing, as described in this case involving a voter suing to get John McCain off the ballot on grounds he’s not natural born either: 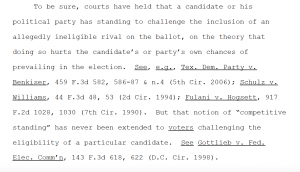