It seems pretty clear that his agenda would be that to push through campaign finance reform (and perhaps then step aside after that, as he had suggested for someone to do in his book).

The first question I’d have is the rationale for him to run when campaign finance reform is one of Bernie Sanders’ few signature issues, and of course Sanders has much more name recognition and organization.

And here is a speech (via Larry”s twitter feed) of a recent speech to the Progressive Change Campaign Committee Introducing the Citizen Equality Act of 2017.  The three planks appear to be (1) to stop voter id and other similar laws making it harder to register and vote (1) change in representation, to something like the use of ranked choice voting (Larry speaks favorably of Fairvote in this context) and (3) public financing of elections. 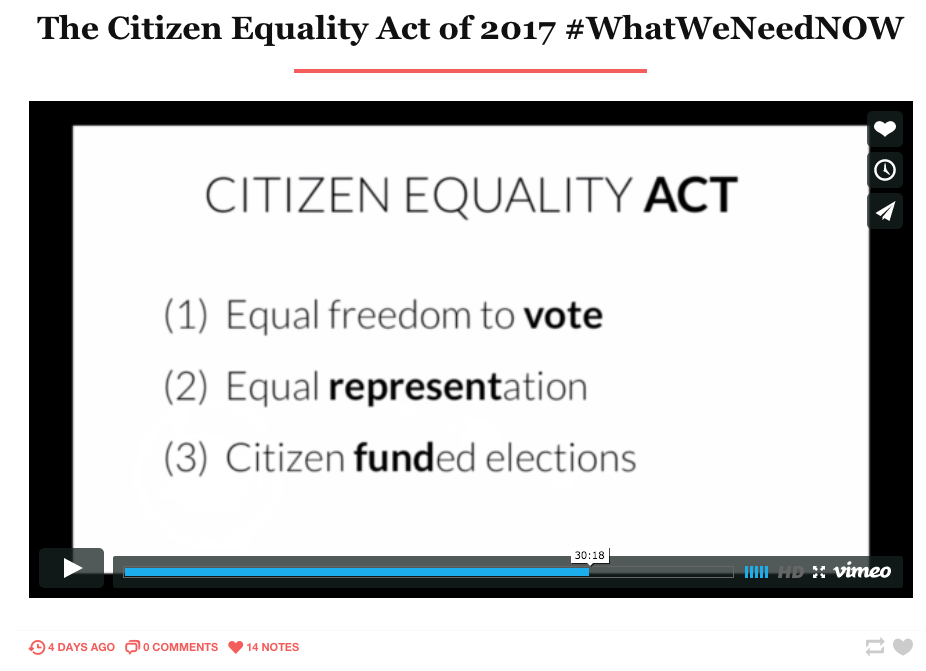 Lessig’s candidacy is aimed at securing passage of the Citizen Equality Act of 2017, a legislative proposal for voter protection laws, new methods for electing representatives and a greater focus on citizen-funded elections.

In his launch video, he explains that he is running to put “citizen equality” on the map, and unless a leading candidate, “whether Hillary or Bernie or Joe or someone else” adopts that mantle, Lessig himself would run as a “referendum president,” serving only as long as it takes to pass that agenda.

Here is the campaign website on the citizen equality act:

We must have a system that guarantees a meaningfully equal freedom to vote. To achieve that, we must at a minimum enact the Voting Rights Advancement Act of 2015 and the Voter Empowerment Act of 2015. We should as well add automatic registration, and shift election day to a national holiday.

Equal citizens must have equal representation in Congress. That means, districts must be drawn, and election systems structured, so as to give each citizen as close to equal political influence as possible.FairVote has offered the most comprehensive solution to achieve this equality. At a minimum, the Citizen Equality Act would incorporate their  proposed “Ranked Choice Voting Act,” which ends political gerrymandering and creates multi-member districts with ranked choice voting for Congress.

A core corruption of our political system is the concentration of funders of political campaigns. That concentration creates extraordinary inequality. The Citizen Equal Act would end that inequality, at a minimum by adopting a campaign funding proposal that is a hybrid between John Sarbanes’ Government by the People Act, and Represent.US’s “American Anti-Corruption Act.” That hybrid would give every  voter a voucher to contribute to fund congressional and presidential campaigns; it would provide matching funds for small-dollar contributions to congressional and presidential campaigns. And it would add effective new limits to restrict the revolving door between government service and work as a lobbyist.