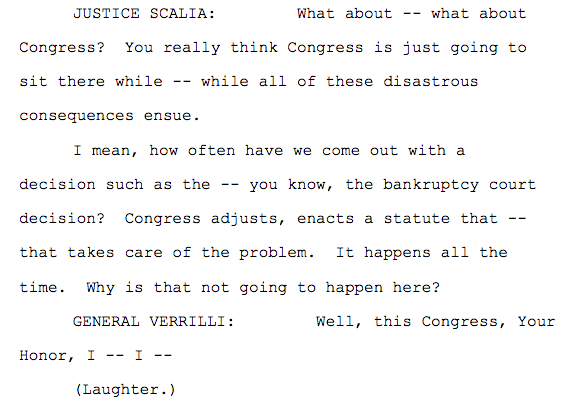 But today, Congress very rarely overturns the Supreme Court, especially in high profile cases with great partisan salience, except in situations (unlike today) where the Congress and Presidency are all controlled by one party. See End of the Dialogue? Political Polarization, the Supreme Court, and Congress, 86 Southern California Law Review 205 (2013) and Response: Conscious Congressional Overriding of the Supreme Court, Gridlock, and Partisan Politics, Texas Law Review See Also,(forthcoming 2015) (draft available) (with Jim Buatti).

As I wrote in this LA Times oped, in relation to the Chief Justice making such an argument, “In today’s fraught political environment, court-Congress dialogues are not generally possible.  But that might not stop Roberts from citing the possibility of such a dialogue  — especially if what he is really seeking is political cover and a chance to redeem his controversial earlier ruling on the Affordable Care Act with a new one that hobbles a key part of the law.”