Adam Liptak’s latest Sidebar column for the NYT takes up a new study of mine, just posted on SSRN, The Most Sarcastic Justice. Adam’s piece begins:

Justice Antonin Scalia has a sharp tongue and a cutting writing style. His signature mode is sarcasm.

It was on display last week when a lawyer made the mistake of saying that Justice Scalia was right — but only “in a literal sense.”

The justice pounced. “Oh, I see,” he said. “What sense are we talking here? Poetic?”

There was laughter in the courtroom, and the lawyer was knocked off his stride.

The moment was routine. And there is little question that Justice Scalia is the most sarcastic member of the Supreme Court.

But it is one thing to make that assertion. It is another to quantify it.

For that, you would need a Sarcasm Index.

Luckily, we live in an empirical age. Richard L. Hasen, a law professor and political scientist at the University of California, Irvine, has developed the necessary tools.

Justice Scalia registered 2.78 on Professor Hasen’s index, dwarfing the showings of every justice he has served with. Justice Samuel A. Alito Jr. came in a very distant second, at 0.43. Chief Justice John G. Roberts Jr. and Justice Sonia Sotomayor did not even register.

Here is a full graphic representation of the Sarcasm Index: 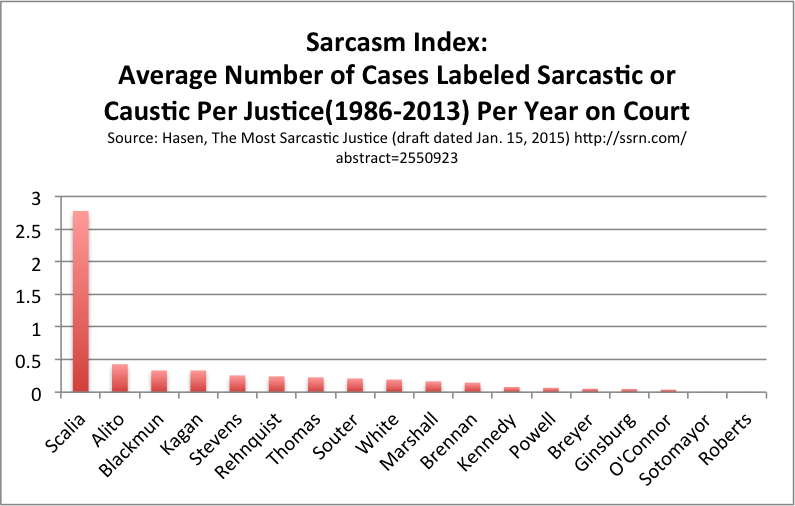 And here is the abstract for my piece:

Justice Scalia is the most sarcastic Justice on the Supreme Court. He has been for at least the last thirty years, and there is good reason to believe no other Justice in history has come close to his level of sarcasm. Now your first reaction to this claim, if you are a (sarcastic) Supreme Court aficionado, is probably: “Well, duh!” And your second reaction is likely: “Oh really? Well how can you prove that?”

In this short essay, I do three things. First, I present empirical evidence showing that Justice Scalia’s opinions are magnitudes of order more likely to be described in law journals as sarcastic compared to any other Justice’s opinions. The numbers are quite remarkable, and do not vary whether Justice Scalia is compared to liberal or other conservative Justices who have served with him on the Court since his 1986 confirmation. Second, I present some illustrative examples of Justice Scalia’s sarcasm from a list of 75 sarcastic opinions from 1986-2013. His ability (and willingness) to engage in nastiness, particularly directed at other Justices’ opinions, is unparalleled. Third, I opine that Justice Scalia’s sarcasm is a mixed blessing. On the one hand sarcasm makes his opinions punchy and interesting, clarifying where he stands in a case and why and gaining attention for his ideas. On the other hand, such heavy use of sarcasm can demean the Court, and it arguably demonstrates Justice Scalia’s lack of respect for the legal opinions of his colleagues. In the end, his sarcasm may be his most enduring legacy.