There’s something of a bait-and-switch going on from those folks supporting the American Anti-Corruption Act.

The main constitutional theory behind the Act is Larry Lessig’s theory of “dependence corruption,” which he sets forth in his book, Republic, Lost, and elsewhere. Larry and I have gone round-and-round on whether or not Larry’s theory is about political equality.  (He says it is not; I say it is—see my HLR review and ELJ piece.)  Larry is also emphatic (and pretty clear) that by “dependence corruption” he does not mean typical corruption where politicians take bribes.  Instead, “In this second sense of corruption, it is not individuals who are corrupted within a well-functioning institution. It is instead an institution that has been corrupted, because
the pattern of influence operating upon individuals within that institution draws them away from the influence intended” (p. 231).

So when the group Represent.us/United Republic (not sure what the relation is between the two) started pushing the American Anti-Corruption Act and claiming it was justified by Larry’s constitutional “dependence corruption” theory, I was surprised to see this: 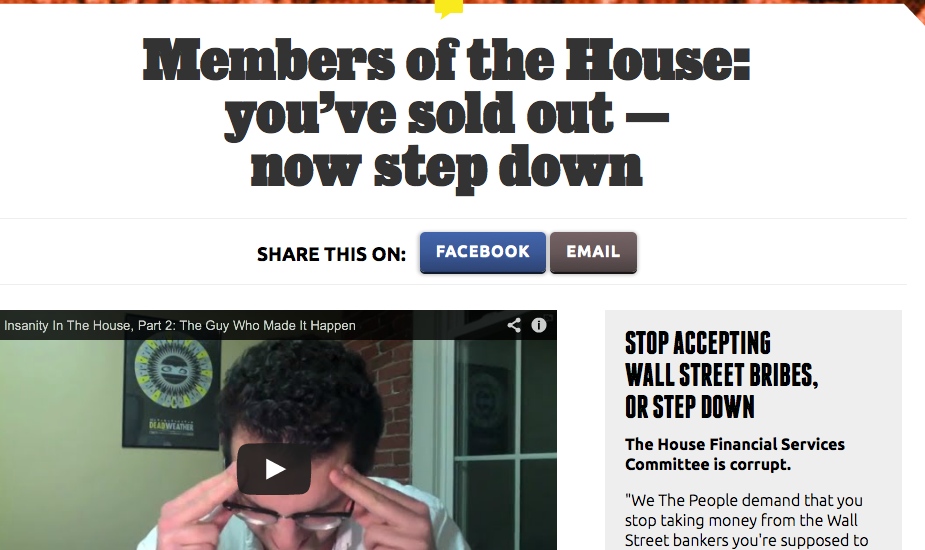 Old style corruption is how Represent.us is trying to sell the American Anti-Corruption Act to the public.  See this from the front of the page for the Act: 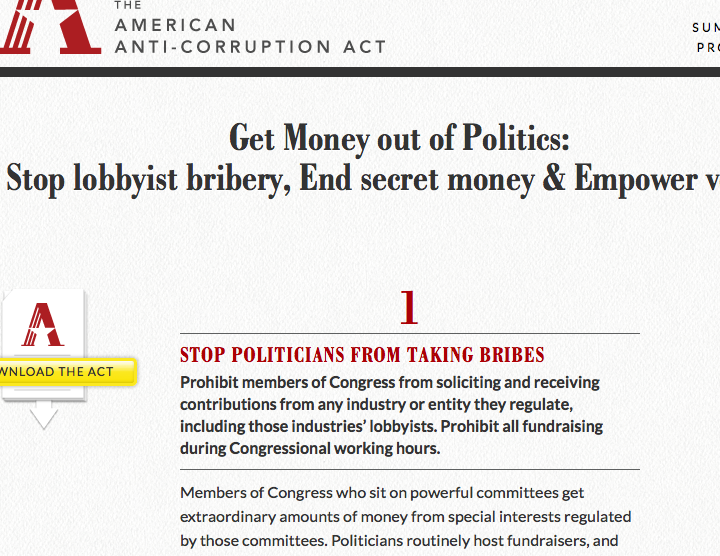 Why the disconnect? Larry is careful to say he is not accusing members of Congress of taking bribes. He writes: “[Dependence corruption is] a corruption practiced by decent people, people we should respect, people working extremely hard to do what they believe is right, yet decent people
working with a system that has evolved the most elaborate and costly bending of democratic government in our history. . . . This corruption has two elements . . . . The first element is bad governance, which means simply that our government doesn’t track the expressed will of the people, whether on the Left or on the Right. . . . The second element is lost trust: when democracy seems a charade, we lose faith in its process. . . .Participation thus declines, especially among the sensible middle. Policy gets driven by the extremists at both ends. (pp. 8–9).

But Represent.us is selling old-style bribery/corruption. Daniel Stid suggests that the reason for the disconnect (or less charitably, in my terms, the bait-and-switch) is that Represent.us is made up of advocates seeking to rally a broader public on the issue.  And I think that’s right.  Check out this new report from CPI about a Represent.us poll finding broader public support for campaign finance laws when the language used is that of “corruption.”

The reason I find this troubling is that I think it is corrosive to our democracy to talk about politicians taking bribes when that is not the real problem.  Larry is talking about the real problem (even though I would characterize the problem as one of inequality not dependence corruption).  But to sell to the public the idea that politicians are on the take—especially when the constitutional justification for the program is something else entirely—seems to me like a bad idea.