The Center for American Politics and Citizenship at the University of Maryland sends along this release:

In the past few months, Super PAC-sponsored negative ads attacking presidential and congressional candidates have become commonplace on TV. Paul Herrnson’s recently-published analysis of the 2010 congressional campaigns shows just how negative the campaign efforts of Super PACs and other independent organizations are.

The 2010 Citizens United v. FEC Supreme Court decision welcomed millions of dollars in independent expenditures by Super PACs, corporations, labor unions, and other private organizations into the fray of campaign financing. Over $131 million was spent by these groups in 2010 influencing congressional elections.

Herrnson’s analysis found that in 2010, the overwhelming majority of these funds were used attacking an opponent as opposed to supporting a candidate with positive messages. While 68% of independent expenditures by traditional PACs were spent on promoting a positive message in support of a candidate, only 23% of independent expenditures by the groups unleashed by the Citizens United ruling (Super PACs, corporations, etc.) were positive. The other 77% — or over $101 million – was spent on negative advertising.

“From what we’ve seen so far from Super PACs during the 2012 presidential primary season, the negative tendency we observed during 2010 is likely to become a trend,” observed Dr. Paul Herrnson, Director of the Center for American Politics and Citizenship (CAPC). “These groups are focusing their efforts much more on negative campaigning than traditional PACs, political parties, and candidate campaigns.”

This analysis, as well as a much broader analysis of congressional elections in general, is available in Dr. Herrnson’s book Congressional Elections: Campaigning at Home and in Washington. 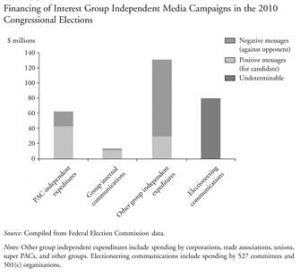